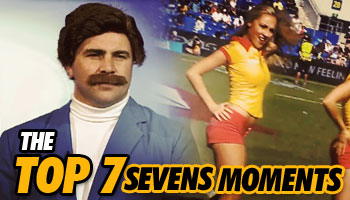 This week’s Top 5 video comes in the lead up to the Gold Coast Sevens, the first leg of the 2013/2014 IRB World Sevens Series. With that in mind, it’s an expanded Top 7, celebrating the shortened form of the game, in the unique Rugby HQ style.

Earlier today Sevens fans got the great news that the IRB have decided to live stream the entire series on their website. If you are living in a country that doesn’t have a broadcast partner, what that means is you will no longer be in the dark as you can keep up online.

You can take a look at the listings to see if live streaming of each tournament, starting with the Gold Coast, will be available in your country via the broadcast details page on the IRB website.

In Australia, where the opening tournament is being held, the guys at Fox Sports are getting in the swing of things by promoting the fancy dress aspect of the tournament, and of course the better or more entertaining bits of play we’ve seen in recent years.

Some of the items featured in this Top 7 compilation can be found in our Related Posts below, where you can view longer videos of the memorable moments. For now though, here is a hilarious edition of the Top 5’s, with Anchorman Sean ‘Burgundy’ Maloney making an appearance.