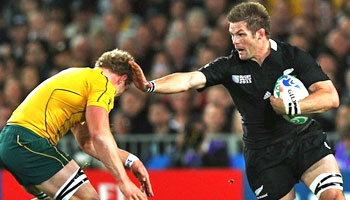 The All Blacks produced a high intensity eighty minutes performance as they outplayed the Wallabies at Eden Park in the second Rugby World Cup Semi Final. The convincing 20-6 win sees them reach the final, where they will meet France next weekend, the same opposition as in 1987.

A 9pm kick off kept Graham Henry up but it was worth it as his side turned things on when they mattered most. Captain Richie McCaw led from the front with his best match of the tournament, while counterpart David Pocock was far less affective this weekend.

“They were fabulous, weren’t they?”, Henry said. “They showed huge character. From minute to minute they gave 100 percent, they gave everything, they were just outstanding.”

The All Blacks are on the brink of repeating their success of 24 years ago, and for Henry, that is attributed to what they’ve put in since he was almost sacked after they went out in 2007.

“Four years of planning, I suppose. Four years of guys being frustrated and wanting to do the job, four years of trying to get things right,” he said.

The third place playoff will take place on Friday, featuring the same two sides that contested it at the inaugral tournament in 1987, Wales and Australia. The final will be on Sunday.

Elsewhere, Sam Warburton has been suspended for three weeks following an enquiry into his sending off against France yesterday. IRB referees manager Paddy O’Brien said that Alain Rolland’s decision to red card Warburton was “absolutely correct in law and in keeping with the clear instructions that match officials have received in recent years regarding dangerous tackling”.