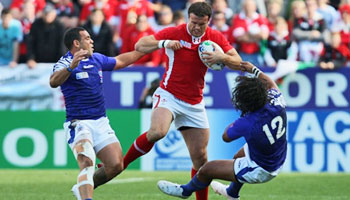 It was an early start for rugby fans in Wales today as their team took on somewhat of a RWC bogey side in Hamilton today. Here is the Rugby World Cup Daily show with a summary of all three of today’s matches, as well as a look at the All Blacks on their visit to Christchurch.

The first game of today saw Wales up against Samoa in what was a vital game to the outcome of Pool D. Samoa actually looked the better side at times, but it was some great defense, a late Shane Williams try, that proved the difference as Wales came away 17-10 winners.

“I thought we showed some great character. A few years ago, or 12 months earlier, we might not have won that game,” said Wales coach Warren Gatland.

England had a fairly challenging ride against Georgia early on, but late in the game they scored a few tries that made the scoreline fairly flattering in the end. The Georgian power up front was impressive, and they were within reach for a while, despite some missed kicks at goal. England gave away 14 penalties.

“Some guys were a little bit rusty. We made things a bit more difficult than they were. It wasn’t good enough and if we are happy with those standards we’ll go home early,” said Martin Johnson.

They did win 41-10 though against a powerful emerging nation, so its not all doom and gloom.

In the final match of the day France and Canada entertained in Napier in a game that tested the French, who ultimately ran away with the game, winning 46-19. Canada were within touching distance for a long time though, as they kept hitting back at the French. A hat-trick of tries for Vincent Clerc took it out of reach however as France picked up the bonus point win.

You can view highlights of the games at rugbyworldcup.com. We’ll try get a few other random clips up during the week though, so make sure you keep an eye on RD’s twitter and facebook.