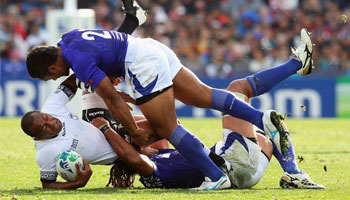 It’s been a fascinating day in New Zealand as three matches took place around the country. Samoa faced Fiji, Russia took on Ireland, and Argentina and Scotland went to battle in Wellington. Today’s Rugby World Cup Daily features the three, and a bit extra.

Samoa now need to beat South Africa to stand a chance of qualifying for the knockout stages.

Ireland 62-12 Russia
Ireland didn’t have too much trouble with tournament debutants Russia in Rotorua, as Ronan O’Gara kicked seven from eight kicks and Keith Earls scored two tries. Russia scored two of their own, which they’ll be more than pleased with.

“A few guys got an opportunity this week to back up the performances of the weekend,” said Ireland’s stand in captain Leo Cullen. “It was important to continue the momentum.”

Argentina 13-12 Scotland
Argentina came from behind to beat Scotland by the narrowest of margins following a late converted try from Lucas Amorosino, with Felipe Contepomi slotting the pressure kick. Scotland had been in control for most of the game until they slipped up on defense with less than ten minutes left.

Scotland will need to beat England and deny them a bonus point to stand a chance of making the next round. The winners of the group will likely face France, the runners-up, New Zealand.

RWC Daily features those matches, and previews the next View highlights of the games here.