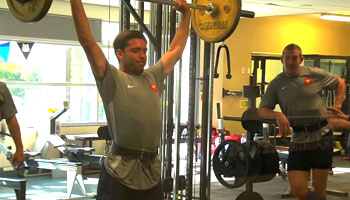 In today’s RWC Daily show, a feature that is going to be posted throughout the tournament, the focus shift to Pool C and the Wallabies, as Robbie Deans and a few of the players talk about their preperation. There’s also a closer look at how doping is regulated.

The idea behind these videos is that you’re given a bit of a a feel for what’s happening over in New Zealand in the lead up to the tournament. Obviously once it actually kicks off properly, and the first game is played, things will get far more interesting as match previews and reviews will be included.

There will also be interviews with players as we’ll get some insight into their thoughts both ahead of, and indeed after, the crunch matches. Round one’s games seem fairly easy to pick, with one or two close ones, and the Wales vs South Africa game in particular being possibly the closest. You can join our pool on Sportguru to make your picks by signing up here. There’s some great prizes too, and it’s free to enter.

One thing we do know is that it’s going to be an even playing field, as stringent doping tests are taking place, as is discussed in the video. There’s probably a fairly high chance that their may be some controversy though, as we saw on the end of year tours last year, with some mixups and harmless, yet illegal substances possibly causing some trouble for a few players. Let’s hope not anyway.

On a sidenote, it’s been a franctic week for RD with all sorts of tech issues and server changes etc taking place. Some people are apparently still having trouble with caching, as the old site is stored on their isp’s side. This will sort itself soon hopefully, but we apologise for the inconvenience anyway.

A lot of time is being spent on making sure other possibly issues don’t arise, so this week has been fairly slow content wise. That’ll pick up soon, so your patience is appreciated. Cheers