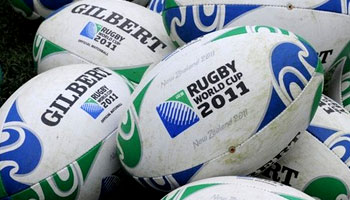 The first week of Rugby World Cup 2011 has passed, and it’s time for a short break, so we now have a few days to catch our breaths, catch up on sleep, and reflect on what’s taken place in the opening round.

Wallabies winger Digby Ioane, who scored in their match against Italy, will be undergoing surgery on the fractured thumb that occured during the match. That could disrupt their backline somewhat as Ioane usually defends at 10 Quade Cooper slips back to fullback. What it may mean though is a miraculous return to the team for Drew Mitchell, who had a bad ankle break in April.

South Africa escaped defeat against Wales, but had two key injuries early on, as Victor Matfield and Jean De Villiers both left the field. De Viliers has a rib injury and Matfield a hamstring. They will probably miss the clash with Fiji, while Bakkies Botha may well be heading home as he’s not responding well to treatment.

In the England camp, their win over Argentina has come at a price as lock Courtney Lawes has been cited for striking hooker Mario Ledesma. The incident occured shortly after a huge, possibly borderline, tackle he put in on center Gonzalo Tiesi, which resulted in Tiesi leaving the field.

The alleged strike on Ledesma was with the knee, on the sideline as he raced across to make the tackle. It looked bad on first sight, but it was hard to see if he actually made contact. We’ll find out soon if he remains in the tournament or not.