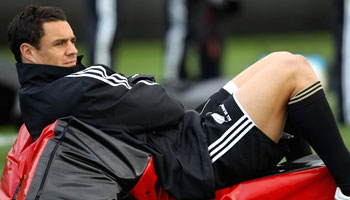 It’s been a long, and good day of rugby at the World Cup as three matches took place earlier with two of them being close fought affairs. Rugby World Cup daily takes a look at the results, and we get a short injury update on the man who can, Dan Carter.

Samoa and Namibia was a bit of a rout, but then the game of the day was the Canadian unraveling of Tonga, which surprised many despite their close proximity on the official IRB Rankings. Tonga have a lot of European and Super Rugby experience, but that didn’t count for much as Canada came out on top, 25-20.

Scotland and Georgia was fairly dire, but a hard fought 15-6 win for the Scots against a strong Georgian side who will always be a tough challenge for whoever they come up against.

Some of the biggest news of the day, and certainly yesterday, are the injuries that are causing a bit of concern for a few teams. Flyhalf David Skrela of France has been sent home, while England’s key front rower Andrew Sheridan has suffered a reoccurence of a shoulder injury, so will be doing the same.

“It’s a big blow to leave the World Cup through injury, but it’s a significant injury to the shoulder, so I have to deal with that and get on with it now,” Sheridan said.

Bryan Habana is also injured (knee), so won’t be taking part in South Africa’s meeting with Fiji. Victor Matfield (hamstring) and Jean De Villiers (ribs) seem to be in the same boat, as does Bakkies Botha (achilles).

The biggest injury talking point in the host nation will be that of New Zealand’s Dan Carter, who has been forced to sit out of their match against Japan because of a sore back. He picked up the knock against Tonga.

By all accounts it seems to be precautionary, as is explained in the below RWC Daily show.