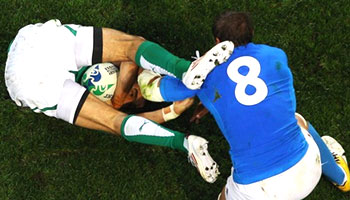 That’s it, all the pool games of the Rugby World Cup are over, and we now know who will play in the next round, the Quarter Finals. It’s an all north affair on one side, and a preview to next years Four Nations on the other. Elsewhere, New Zealand is in shock at the loss of Dan Carter.

As speculated yesterday, Carter is now officially out of the World Cup. He suffered a groin tear during training ahead of the New Zealand match against Canada, and will take no further part in the tournament. Colin Slade will step up into the key role, with Piri Weepu and young Aaron Cruden providing cover.

Some may say that the big game experience of Nick Evans or Luke McAlister may have been a safer bet than Cruden, but both are off the radar and getting on with life in England and France respectively.

Carter is arguably the most complete flyhalf of a generation and while Slade is wonderfully talented and will slot into the system well, without Carter’s experience and composure, the All Blacks look just a little more beatable now. They had no trouble with Canada though, winning 79-15, and will face Argentina in the quarter finals on Sunday.

Argentina themselves got through unscathed against Georgia with a 25-7 win in Palmerston North.

Wales beat Fiji 66-0 in a rout, with young winger George North showing his class, and Jamie Roberts scoring twice. They head into their quarter final with Ireland next weekend in good spirits.

Italy had hoped for a win to shake things up, but Ireland were too strong as they came away with a convincing 36-6 victory. Ireland top their group and will look forward to the meeting with Wales.

The Quarter finals layout is as follows: