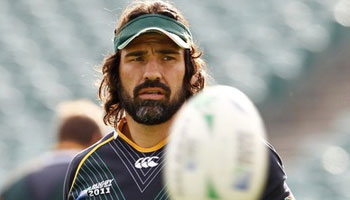 There weren’t any matches in the World Cup today so the focus shifts to tomorrow’s big game between Samoa and South Africa, a match that has all sorts of permutations for the group. RWC Daily also chats to John Kirwan, and looks at rugby development around the world.

Pool D, otherwise known as the group of death, has brought the best out of some sides, and totally fatigued others. We’ll soon find out who the top two sides are that will go through to the quarter finals, and while they will have had a pretty tough route to get there, they’ll no doubt be in a good position for it.

In 2007 South Africa had a similar group, with tough matches against England, Tonga, and Fiji. Ironically it was the latter two sides that tested them the most, but having got through those matches they were then in a position to continue on at a high level of intensity. One of the suggested reasons for New Zealand’s demise in the same tournament was that they had a fairly easy route to the knockout stages.

This year, a similar situation has occurred and while nobody would want to be in the group of death, by midday tomorrow we’ll know where everyone stands. Wales still need to play Fiji, but with the Welshmen on form and Fiji looking weaker than they have in past tournaments, you’d think that should go to script.

Samoa will be out to replicate the heights they achieved against Australia prior to the tournament. They need to beat South Africa with a bonus point to have a chance of making the next round. One thing is certain, it’s going to be physical. Both sides have some serious size out there, but you’d think that South Africa’s experience in tight matches will play in their favour.