Rugby World Cup Daily - Standing out from the crowd 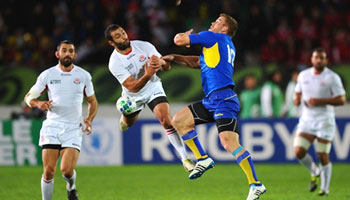 There was only one RWC game today, as the first ever meeting between rivals Georgia and Romania at the World Cup took place at Arena Manawatu in Palmerston North. RWC Daily covers the match, as well as chats to bearded Canadian Adam Kleeberger, and visits the Samoa side as they play some golf.

With Sebastien Chabal being left behind in France, this World Cup was in much need of a bearded here. Up stepped Kleeberger and his teammates from Canada. Tip for any youngster wanting to get noticed – stand out from the crowd. Facial hair, peroxide, white boots, socks down.. there’s a few tricks that usually work.

As Kleeberger says in his interview, you need to make sure you can back that up with quality play, and he’s done just that for Canada, and will no doubt be hoping that his performances got noted by a few clubs willing to snap him up after the tournament.

When it comes to the so called minnows, that’s often the case as rugby isn’t always their full time profession. It can be though, and Georgia and Romania are two sides who were also out to impress at the tournament. Today they played a game that was tipped as a big eastern european clash, but it turned out being a fairly comfortable 25-9 win for the Georgians.

Samoa, who have a lot of players already playing in Europe, took some much needed time out ahead of their crunch meeting with South Africa on Friday. Alesana Tuilagi, who will look to make a massive impact out wide, is clearly better suited to the rugby field. It’s probably safer for everyone, including the golf balls.