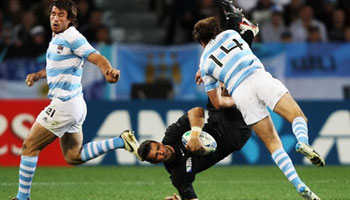 Super Saturday kicked off in the early hours of Saturday morning for most of us, with four matchestaking place on what has been dubbed as Super Saturday. There were nearly a couple of upsets, but overall things ended the way most would have expected.

Scotland 34 – 24 Romania
Romania gave Scotland somewhat of a scare as the Scots needed two late Simon Danielli tries to take them clear of avoiding an embarassing upset. Romania led the game before Scotland pulled things together.

“We had to come back, we were in a tough situation with about 10, 15 minutes to go and we dug it out,” said captain Alistair Kellock.

Fiji 49 – 25 Namibia
Namibia put up a spirited performance against the flying Fijians in Rotorua. Namibian flyhalf Theuns Kotze took them into the lead with an incredible three dropgoals, but the pacific islanders came back, with Vereniki Goneva becoming the first Fijian to score a World Cup hatrick. He ended with four tries, only the 11th ever player to accoplish that feat.

France 47 – 21 Japan
France also found themselves in a bit of trouble in North Harbour stadium as Japan played some inspired rugby to get themselves without five points at one stage, looking as though they were in control of the match. Hot on attack, John Kirwan’s had France sweating, but it didn’t last long as the talented French backs scored a few tries from turnover ball, maybe the final scoreline a lot more flattering than it perhaps could have been.

England 13 – 9 Argentina
In what was touted to be the game of the day, England and Argentina contested a heavyeight battle in Dunedin’s impressive new Otago Stadium. Poor kicking was the order of the day, as both sides struggled, with Jonny Wilkinson in particular having what was probably his worst every goal kicking performance. He said afterwards that the only thing to blame was himself, not the ball, nor the stadium.

“The difficulty was that I felt I was hitting the ball well and expecting to see it go where I wanted it to go, but when the ball moves a bit how do you correct something that didn’t feel wrong,” said Wilkinson

“Christ, I didn’t even know how many I missed. I’d say I’ve probably had days like that but not for a while. The blame is on me,” he added. England will be relieved to have won the match however.

Below is the daily updates show, which runs through the games, features Buck Shelford, and includes Springbok coach Peter De Villiers sounding quite eloquent. Yes, you read that correctly.