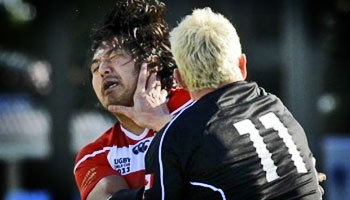 Two good games of rugby took place earlier today in New Zealand as Japan and Canada ended level on 23-23, and Italy beat the USA 27-10. RWC Daily takes a look at both matches, features the world’s first Rugby museum, and updates you on injury news.

In an incredible reversal of what happened at the 2007 RWC, Canada came from behind to snatch a late draw with a penalty from Ander Monro, signalling the end of Japan’s tournament. Four years ago it was them who grabbed the thrilling draw with a late conversion from Shotaro Onishi.

Canada still have a chance mathematically, depending on the next set of results. They need Tonga to beat France, and they themselves need to beat New Zealand with a bonus point.

In the second game of the day it was Italy who put themselves in a good position to quality for the Quarter Finals, as they now know exactly what they need to do – beat Ireland. Their bonus point win over the USA displayed their power up front, which they’ll need to call on if they’re to progress to the next round.

Elsewhere, two key number eights are on their way home as they have both suffered leg injuries. Australia’s Wycliff Palu has a damaged hamstring, while Juan Martin Fernandez Lobbe of Argentina injured his ACL (anterior cruciate ligament) in his knee. You can view highlights of today’s games on the RWC website.