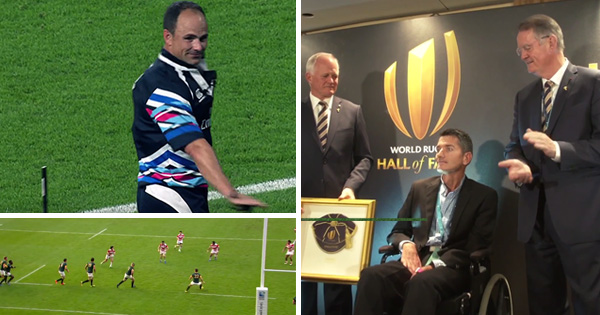 It was a fascinating opening round at the World Cup, so today in RWC Daily we get to see another angle of that famous Japanese winning try, hear more about the handling of the TMO and see footage from the Hall of Fame ceremony.

There isn’t a rugby fan on the planet who hasn’t yet heard about Japan’s famous win over South Africa. It’s easily one of the biggest moments in the history of the sport, not only for the result, but for the couragageous way the Brave Blossoms achieved the win.

Today we get to see another angle of the try and see the fans go wild as it is scored. There have been numerous mobile phone videos from similar angles, and some of them reveal some quite unbelievable scenes, most of which even include South African fans cheering.

Another hot topic from the weekend was the use of the Television Match Official (TMO), most notably in the opening game of the tournament. Match Officials Manager Joel Jutge has spoken about what went on in the eight matches from the opening round of RWC 2015.

There were 25 TMO calls, so it works out to 3 per match, but as Jutge explains, there were 6 in the opening game so naturally fans were up in arms. He also says that the time taken was too long, however he added that only one of those 6 – the checking of the Nemani Nadolo try – could have been avoided.

“We need to improve the process between the referee and producer, the brodcaster, and hawk-eye. We know that it was not perfect, but we will work hard to change this process, or improve this process,” explained the former Test referee.

Also this week, 25 rugby legends were inducted into the World Rugby Hall of Fame, including the likes of Barry John, Danie Gerber and the great Joost Van Der Westhuizen, who managed to make it to the ceremony despite his ill health.