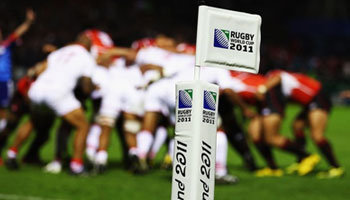 Tonga and Japan provided another entertaining World Cup game earlier today as the Tongan fans finally got something to cheer about, as their side came away 31-18 winners in Whangarei.

Flyhalf Kurt Morath kicked sixteen points for the Tongans as Japan suffered their 17th consecutive RWC loss. Coach John Kirwan had aspirations of picking up at least one win, and Tonga would have been a game they targeted for a win.

Vili Ma’afu, Lua Lokotui, and Fetu’u Vainikolo all scored tries for the Tongans while Morath did the rest with the boot. Japan themselves scored three, but failed to land most of their kicks.

In today’s Rugby World Cup daily there is a short recap of the game, but we also get to see what’s happening at the fanzone in Christchurch, where despite their being no matches, they’re still creating a tournament buzz.

There’s also a look at why the smaller nations, often referred to as minnows, are now becoming more of a threat, as they are no longer serious whipping boys when it comes to the World Cup.

You can view official highlights from the match here.

What were your thoughts on the match, and do you see Tonga progressing further?