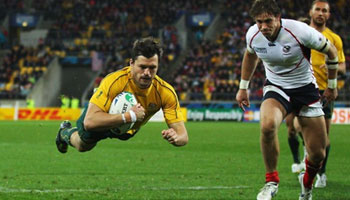 The Wallabies beat the USA 67-5 in Wellington earlier today but picked up a few injuries that will be a major concern for coach Robbie Deans. RWC Daily takes a quick look at the game, and we get a preview of New Zealand’s big match against France.

Australia scored 11 tries as they snuffed out the USA threat in what was another high scoring game. Injuries have led Deans to consider calling up other players though, as Rob Horne, Pat McCabe, Anthony Faingaa, Kurtley Beale, and Wycliff Palu are all concerns.

Fainga’a was knocked out cold late in the game, but was apparently walking around shortly afterwards, so should be okay. Horne has a broken cheekbone, and McCabe dislocated his shoulder. The others don’t sound too serious though, and there are eight days rest before their next game.

“It’s pretty extensive (the injury count). It’s part of the game. Obviously it would be better to avoid them but that’s how it happens,” said Deans after the match.

Elsewhere, all the talk is of New Zealand’s grudge match with France, the side that knocked them out of the 2007 tournament at the quarter finals stage. Ironically, the draw is such that each side might not mind losing this one to get a slightly easier, on paper, route.

You can view highlights of today’s match on the Rugby World Cup website here.