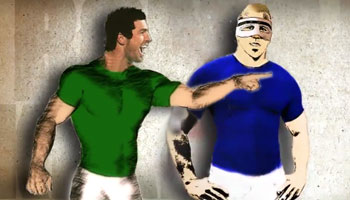 The count down is well and truly on, as it’s just a matter of days before RWC 2011 kicks off. The twittersphere and everywhere else, online and off, is hotting up big time as everyone gears up for 2 months of rugby bliss. Here’s something different to the norm, submitted earlier today by the guys who made it.

You may not be a Manga fan, and you quite possibly don’t even know what Manga is. Fear not though as all you need to do is watch as you’re taken on a rugby journey through some unbelievable animation and motion graphics that tell a story, featuring well known rugby players as they battle it out.

It’s made by brothers Michel and Nicolas Arribehaute, who had just 4 months to put everything together after starting with a blank canvas. The result is pretty incredible. Even if it’s not your scene, there’s no doubting the time, effort, and skill that went into making it.

Have a watch. It’s something different and after we first tweeted and spread Graham Love’s Lego RWC video – which proved to be a massive viral hit – it’s probably worth doing the same with this, to see the response.