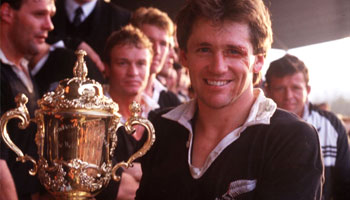 On the eve of the Rugby World Cup in New Zealand, we take a nostalgic look back to the last time the All Blacks won the tournament, which is incidentally also the last time they hosted it, nearly 25 years ago in 1987.

This brilliant documentary takes us through the build up and various rounds of the tournament from the players’ and fans perspective. It was the amateur era back then, so things were very different but the passion and belief, as well as the pressure of a nation, was very much the same as it is today.

Stars were born as the likes of John Kirwan and Sean Fitzpatrick established themselves and match winners, while halfback David Kirk stepped up so manfully to take over the captaincy after Andy Dalton had been injured. When Dalton returned, Fitzpatrick kept him out the side with good form, so Kirk stayed on to become an intergral part of New Zealand’s success.

It was the inaugral tournament and as you will see, was very much a shock to the system for some of the players. While it was nothing like New Zealand 2011 will be like, it was far larger than anyone had imagined at the time. Having said that, there was a brilliant amateur factor to it all, with Zinzan Brooke talking about how he went to watch some kids playing rugby before the final, and then the monday after winning, most of them were ready to go back to their jobs bright and early.

Current World Champions South Africa weren’t at the tournament due to politcal unrest and sanctions, but Australia, New Zealand, France, England, Wales, Scotland, and Ireland were joined by nine invited nations. The qualifying process as we know it today was not in place. That resulted in five of the current Rugby World Cup records for highest scores taking place in that tournament, in 1987.

Against Italy, the All Blacks racked up a 70-6 win and those on hand witnessed one of the greatest ever solo tries seen on a rugby field, scored by John Kirwan as he glided through the defence from a restart. That was just one of many great moments from back then.

It’s a brilliant show that I’d highly recommend watching, so if you have an hour to spare, make sure you kick back to catch up on the last time the best team in the world won the Rugby World Cup.