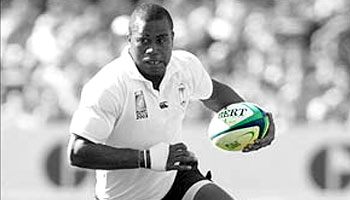 Anyone who’s ever seen Rupeni Caucaunibuca play will know that on form, and when fit, he’s probably the most explosive winger we’ve seen in a long time.

He was with Auckland a cpl of years back in the Super 12. Since then, he’s wandered around clubs in France and has been a regular no shower at important matches.

He’s done it once again. The Fijian wingers future at the club is in doubt, with club officials seeking clarification regarding his commitment to the club.

Anyone who has more clips of this guy plz let me know.

Update: As Jeff has so kindly & politely pointed out in the comments section, Caucaunibuca has been playing in France for Agen and doing pretty well apparently. Still would love to see him in the Super 14.