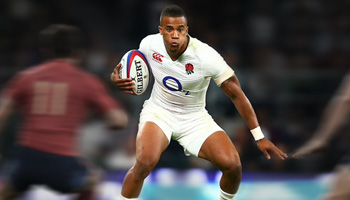 In our latest Players to Watch post leading up to the World Cup, Rugbydump looks at the dangerous, lightning-fast speedster of the England team, Anthony Watson.

Bath flyer Watson first became known to those in the world of rugby when a highlight reel of him playing for England youth and St George’s College popped up four years ago.

He was picked up by London Irish and his performances for them and also for England U20s saw him move to Bath in 2013, where he has since flourished.

His deft footwork and vision in attack have seen him make 10 appearances for England to date, scoring four tries, including two pieces of clinical brilliance against France last week.

Watson, 21, is adept at playing on the wing or at fullback and it is not just his superior attacking flair that has seen him jump to the top of Stuart Lancaster’s wing queue. He is brilliant under the high ball, has an exceptional ability to read an attack, and uses his wiry strength in every aspect of his game.

England have a lot of work ahead of them if they are to get themselves out of Rugby World Cup’s Pool A, or the Group of Death as the media are affectionately calling it, but with Watson and a home crowd behind them, anything is possible.

Watson won’t be playing for England against France in Paris tonight, but below is a nice tribute video that shows a bit of what he’s capable of with ball in hand. One to look out for at the RWC.