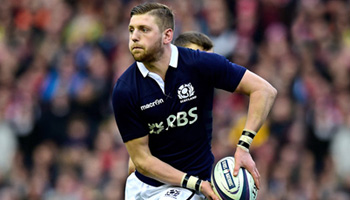 In the first of a new series of posts leading up to the Rugby World Cup 2015, we look at Finn Russell and the impact the youngster can have on an improving – but still nowhere near the finished article – Scotland team.

Russell burst onto the international scene last November after establishing himself as Glasgow Warriors’ – who won a first ever PRO12 title with him at the helm – first-choice 10.

He was a rare shining light in Scotland’s recent Six Nations campaign, in which they finished last, winning plaudits from all directions with his vision, tactical kicking, and that increasing attribute among fly halves, physicality.

He is certainly the man to lead a young, exciting Scottish backline which includes the likes of Mark Bennett, Stuart Hogg and Tommy Seymour. His ability to spot a half-gap, combined with his deceiving acceleration and stubbornness in the physical side of things, means that opposition defences will have to be seriously switched on when marking him.

Defence is another strong aspect of his, highlighted in Scotland’s Six Nations opener against France. He is not afraid to put his body on the line to chop down the big men and he also has the nous to rip the ball in the tackle.

Scotland find themselves in a tough Pool B in the World Cup. Defeating South Africa could be a step too far, especially after playing continuously improving America and Japan, before a potential winner qualifies match against bruising Samoa.

But if Russell combines well with his backs and pulls the necessary strings, don’t be surprised if the country find themselves in the knockout stages going toe to toe with the big boys.

Watch his highlights below, and him talking about Scotland’s World Cup chances on page two

Scotland begin their Rugby World Cup build up with a series of warmup matches beginning in August. They play Ireland at the Aviva Stadium in Dublin on August 15, before facing Itay away and home and finishing against France in Paris on September 5.