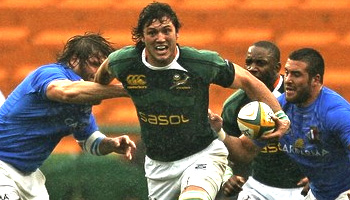 A tackle or a shoulder charge? The referee thought the latter, and proceeded to yellow card Italian second-row Carlo del Fava following his knock out hit on Springbok & Sharks star Ryan Kankowski.

The electrifying number eight was playing in just his third Test for South Africa when he suffered a head on head collision with the oncoming Italian defence. Kankowski was out cold for a few minutes before he was able to be manoeuvred onto a stretcher and taken from the ground.

Del Fava looked to be unlucky to have received the sin-binning, with the clash of heads possibly causing more damage than the shoulder itself, and he showed remorse and genuine concern when standing to clap off the Bok flyer.

Kankowski recovered well though, and was actually sit up in the change room minutes after being carried off the ground. Despite this, medical protocol requires that he be properly assessed before he can be cleared to play again.

Up until a few years ago there was a mandatory two week suspension for concussion, but more recently cognitive tests have been introduced to determine the extent and nature of concussion. So Kankowski could theoretically be cleared to play in the Tri-Nations opener against New Zealand in Wellington on 5 July, and go on to play a vital role in the Springbok’s 2008 Tri-Nations campaign.