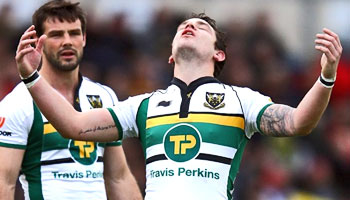 Here’s a quick look at what happened in a recent Aviva Premiership game when Northampton Saints’ Ryan Lamb kicked what he thought was a successful penalty. The TMO was called into play, but even then, the result of the kick was inconclusive.

In the World Cup we saw an incident in the Sprinboks vs Wales pool game when James Hook kicked a penalty that he was adamant had gone over. It was ruled otherwise at the time, and there was no referral to the Television Match Official, which outraged Welsh fans following the loss.

In that occasion it wasn’t clear that it had gone over, even on TV, but there was still a huge amount of controversy simply because the TMO wasn’t called into action. Fast forward two months and Lamb’s kick for Saints showed that even when calling for the fourth official, the correct decision is not certain.

In this case the benefit of the doubt went with the referees on the field, who thought it missed. Lamb was certain it swung in, but TV replays weren’t clear as the bright background of the sky and a few poor angles meant we were none the wiser. The solution? Double the length of the posts.

In the real world, endangering low flying aircrafts isn’t the way forward. This is probably just one of those things we can’t control. On most occasions the guys below the posts, and the ref, should have the best view. When things are questioned or the officials are unsure, a call to the TMO is the correct one. At times we’ll get a situation like this, but it’s a rarity thankfully, and until someone comes up with a hawkeye for the posts, life goes on.

Some of you wanted to see this again, so while it’s possibly one of the most boring clips ever posted on here, it is an interesting one that is fairly topical, following the Hook incident and then the kick from Stephen Donald in the RWC Final, that some still think missed.