Ryan Wilson may be in big trouble after citing commissioner intervention 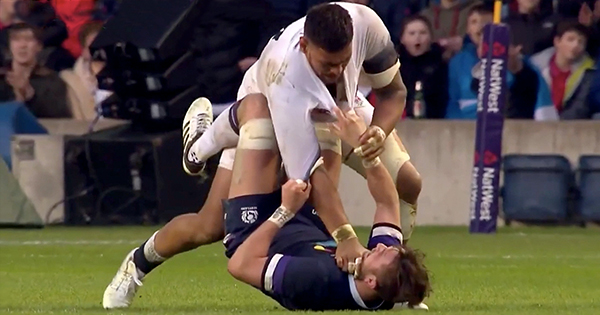 Scotland backrower Ryan Wilson has been cited following Saturday’s historic Calcutta Cup win over England at Murrayfield. Wilson was involved in the tunnel scuffle with Owen Farrell prior to kick-off, but this citing is for a different incident.

Scotland won the match, beating England for the first time in ten years, but as could be expected, there was plenty of feeling out there.

Things boiled over slightly just before the break, when England number eight Nathan Hughes and Wilson got to grips with one another.

Wilson appeared to drag his fingers over the face of Hughes, but referee Nigel Owens at the time sorted out with an old fashioned chat and quick telling off.

He has been cited for ‘an alleged act of foul play’ by the independent Citing Commissioner appointed by World Rugby. The alleged offence is for contact with the eye area of an opponent (Law 9.12).

A disciplinary hearing will take place before a Six Nations Disciplinary Committee on Wednesday.