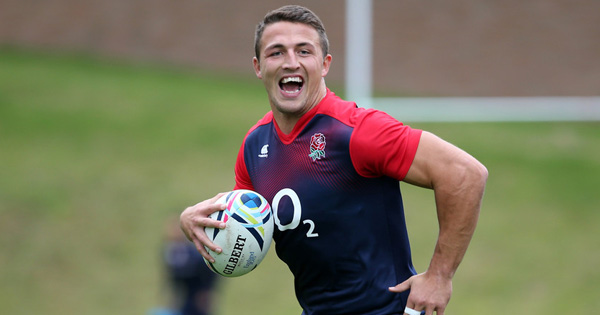 Sam Burgess insists club allegiances have been put to one side as England go in search of World Cup success on home soil. Burgess has been named on the bench for Friday’s opening clash against Fiji while three of his Bath team-mates have been selected by Stuart Lancaster in the backs.

George Ford starts at fly-half, Anthony Watson is named on the right wing and Jonathan Joseph retains his place at outside centre for the Twickenham curtain-raiser.

Yet Burgess, who saw Saracens’ Brad Barritt given the nod ahead of him at inside centre, believes there is more to England’s attacking threat than the quartet from The Rec.

“It’s not necessarily the Bath brigade, we’re an England team now and that’s the way everyone looks at it,” said Burgess. “There are a lot of players from a lot of different clubs but we’ve stamped that out from day one. We’ll have to be a team to win this competition.

“We’ve got a great balance within the squad and I think Brad was exceptional in (the Ireland game) last week and it’s the same with JJ (Joseph), his work-rate off the ball is unbelievable.”

Rugby league convert Burgess admits his selection for the World Cup has justified his decision to leave the South Sydney Rabbitohs in 2014.

Reports this week linked the 26-year-old with a return Down Under, but Burgess says he’s focussed solely on the matter at hand.

“There is no truth in it at all, I’ve not heard a word from Australia and I don’t know where it has come from but it’s definitely not true,” he said. “It’s not going to unsettle me before the World Cup, I’ll just put it to bed.

“I’m thrilled to be in the World Cup squad. I dreamed of getting in this position. Once I made the decision to come over, one of my goals was to play in this World Cup. It’s here now, I’ve just got to get out there and do my bit for the team and for this country.

“Sometimes you have a little bit of doubt, but you should never be scared of that. Doubt can sometimes be a driving factor but I always had belief that I could add something to the team. I’m thankful to be here now, and I’m looking forward to growing as an England player.”