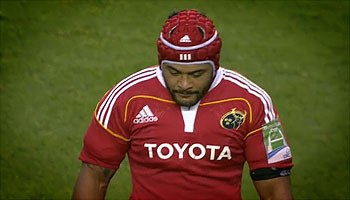 Former Auckland Blues and Worcester center Sam Tuitupou has been cited for making a dangerous tackle on Paul Hodgson in Munster’s meeting with London Irish in the Heineken Cup on the weekend.

While the goal is to get more tries and possibly highlights up, I heard about this citing earlier so thought some of you would be interested in seeing it. Highlights take time, whereas this is just a quick, easy clip to get up before hitting the sack.

Tuitupou was yellow carded for the tackle he made on scrumhalf Hodgson, who looked worse for wear after taking the hit, but later continued on. The Munster center was cited earlier today, accused of making a dangerous tackle by Welsh citing commissioner Ray Wilton.

Law 10.4(j) states that Lifting a player from the ground and dropping or driving a player into the ground is dangerous, and thats what he was pinged for. In other words, a spear, or tip tackle.

If found guilty a low end sanction will find him sitting on the sidelines for three weeks, mid range is six weeks, and maximum is 52 weeks. In this case, if found guilty, it shouldnt be more than three weeks.

In other citing news, Cardiff Blues flanker Martyn Williams has been cited after he allegedly dropped a knee into Edinburghs Chris Patersons face. Scarlets lock Jonny Fa’amatuainu is also in trouble after he too made a dangerous tackle on the weekend.

UPDATE: Tuitupou has been suspended for three weeks for this tackle.