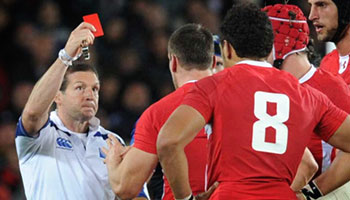 France are through to the Rugby World Cup final following a 9-8 victory over a Welsh team that had their captain red carded in the first half. The decision from referee Alain Rolland has divided rugby fans, with many puzzled by the call.

It’s a decision that will be spoken about for many years to come, as Rolland gave Sam Warburton a straight red card for a dangerous tip-tackle on French winger Vincent Clerc. By the letter of the law, Rolland probably got it right, but being a World Cup semi final and going on the consistency shown by refs in the past, it seemed a fairly harsh decision.

“Having looked at it I think we accept that Sam has lifted him. It probably warrants a yellow card under the direction the referees have said about players being lifted,” said Warren Gatland.

“But he lets him go. He doesn’t drive him into the ground. The player was fine to carry on. The thing that surprises me is the reaction of the referee is instant and I thought an experienced referee at that stage would have said ‘hang on a minute, let’s bring the touchies in’… they would have had a chance to look at the screen and see the replay and perhaps made a cool judgment.

“But that just came out of the blue … for an experienced referee to make such a crook decision in a semifinal of the World Cup … I just thought that decision ruined that semifinal,” he added.

French coach Mark Lievremont said he felt Warburton deserved to be sent off. “I was quite disappointed that a semifinal match became unbalanced so quickly, but it was a very dangerous tackle that deserved a red card,” he said.

Wales somehow managed to compete despite being down to 14 for the majority of the game as the French failed to lift their intensity, and had it been for better goal kicking and decision making from the Welsh, the result could have easily been so different.

Warburton now faces the prospect of being banned for up to 10 weeks under the IRB regulations. If the red card decision is upheld, he will face a suspension of anything between 3-10 weeks, which will rule him out of the opening rounds of the Heineken Cup with Cardiff Blues.

In other matches in the tournament we’ve seen tacklers lift players above the horizontal and only receive yellow cards, or penalties. Those usually result in suspensions however, which in essence says that the decision was incorrect at the time and the player should have been red carded.

In this case, Rolland took a strong viewpoint and applied the 2009 directive from the IRB that states if ‘The lifted player is dropped to the ground from a height with no regard to the players safety.. a red card should be issued for that type of tackle.‘

For the Welsh, and rugby fans in general, the frustrating thing is that referees don’t always apply this, so when it happens in such a crucial game, it’s difficult to accept, and even understand.

It was a courageous effort from Wales, but they will rue their missed chances, and France go on to the final, where they will face the winner of tomorrow’s semi final between the All Blacks and Wallabies. Wales will play again however, in the third place playoff.

The below video includes the tackle itself, interviews, the views of Francois Pienaar, Lawrence Dallaglio, and Martyn Williams, as well as a look at other tip-tackle incidents from this World Cup.

The most sensible comment (from a registered user) will receive a Rugbydump Hoodie.