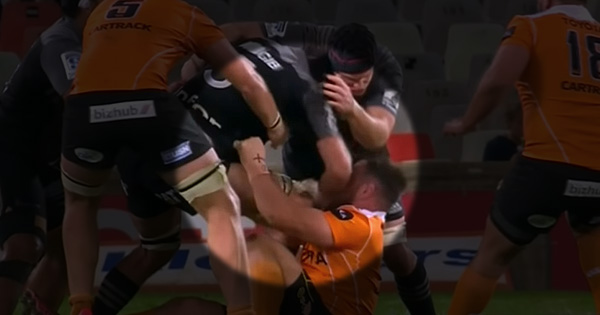 Earlier this week Crusaders second rower Sam Whitelock was suspended for 2 weeks, following a SANZAAR Judicial Committee Hearing that ruled that he had contravened Law 10.4(a) Striking another Player with the arm, after he was cited during a Super Rugby match at the weekend.

Whitelock was taken out in the air by Cheetahs replacement prop Charl Marais, then retaliated with a forearm/elbow glancing blow to the face.

The SANZAAR Judicial Committee Hearing held via video conference on 1 May 2017 was before Terry Willis (Chairman), De Wet Barry and Mike Mika. They found the following:

“Having conducted a detailed review of all the available evidence, including all camera angles and additional evidence, including from the Player and submissions from his legal representative, Aaron Lloyd, the Judicial Committee upheld the citing under Law 10.4(a) Striking another Player with the hand, arm or fist.”

“However, taking into account mitigating factors including the fact that the Player had an excellent disciplinary record including 110 Super Rugby games for the Crusaders and 84 test caps for the All Blacks, the Judicial Committee reduced the otherwise applicable sanction from 4 weeks to 2 weeks.  The Player is therefore suspended for 2 weeks, up to and including 13 May 2017.”

There was some concern that Marais put Whitelock in a dangerous position by taking him out in the air, but was not penalised or punished. That seemed to be overlooked by the officials on the day, and the citing committee, leading to some fans’ consternation.

You can see the incident in the quick clip below.