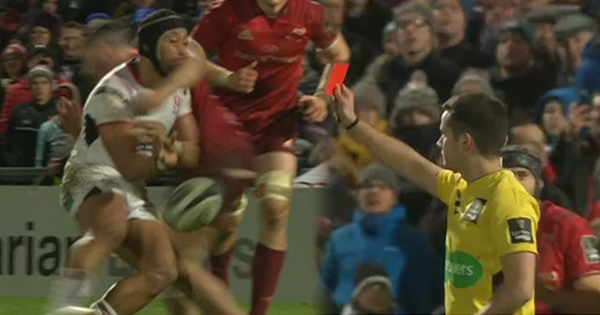 Munster’s Sammy Arnold faced a disciplinary hearing last night after being cited for this dangerous tackle on Ulster’s Christian Lealiifano at the Kingspan Stadium on New Year’s Day. He was issued a straight red card by referee Sean Gallagher.

Arnold, just 21-years-old, flew into the former Wallaby, seeming to aim for the chest area but instead striking Lealiifano around the chin with his forearm.

The disciplinary panel met in Neath to consider the red card decision, which was issued under Law 10.4 (e) – Dangerous Tackling: A player must not tackle an opponent early, late or dangerously.

“It was never the intention of Sammy to hit Christian there,” said Munster coach Johann van Graan. “Unfortunately his arm slipped up and left the referee with no other choice but to red card him.”

The panel concluded that Arnold’s tackle merited a mid-range entry point, as players must not tackle above the line of the shoulders. A mid-range offence carries a six-week suspension.

However, the ban was reduced after full mitigiation of 50 per cent was applied after having taken into account the player’s conduct throughout the hearing, and his previously clean record.

Arnold is therefore banned for a period of three weeks, and is free to play again from January 22.