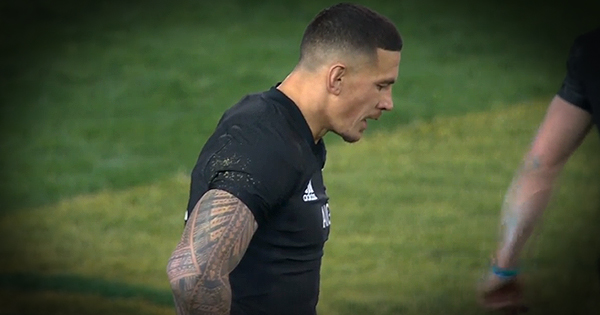 Following a worrying head-knock incident in the opening minutes of the Rugby Championship clash between Australia and New Zealand, SANZAAR have released a statement saying that they have urgently reinforced the Head Injury Assessment (HIA) protocols.

All Black centre Sonny Bill Williams was clearly ‘sparked’ when making a tackle just two minutes into the game in Sydney. Footage shows that he tackled Michael Hooper and possibly knocked heads with teammate Joe Moody, then got up looking punch-drunk, with his legs all over the place as though he had been KO’d when boxing.

He regathered his senses and actually made two more tackles in the same phase of play, but he looked in bad shape and in the third tackle it looked like he took another blow to the face or head.

According to current World Rugby HIA protocols, Williams should have been removed from the field for an assessment. Instead, he played the full eighty minutes, contributing to the emphatic 54-34 with a try in the first half.

SANZAAR today released a statement to say that they investigated the incident and have stressed the importance of the HIA protocols to all teams, medical staff and match officials involved in the tournament.

Followng a review, they established that there was not a deliberate failure or an ‘untoward incident’ as such took no further action for anything that constitutes misconduct.

They did however acknowledge the following:

“Following the investigation, and to ensure player welfare standards and HIA protocols are tightened, SANZAAR has immediately initiated the roll out of additional educational modules for all match day medical staff, team management and match officials.

“The intent is to ensure best practice methods are entrenched through refreshing the knowledge of medical personnel and expanding the knowledge to match officials and team management in recognising the symptoms with Ataxia (unsteadiness) and suspected loss of consciousness.

“SANZAAR has communicated with the National Unions of Argentina, Australia, New Zealand and South Africa to remind all match day staff, team management and match officials that continual education and best practices are a collective responsibility to ensure player welfare standards are upheld at all times in and out of competition.”

SANZAAR CEO Andy Marinos stated that it’s an unfortunate incident given all the attention placed on player safety and head injury prevention in rugby at the moment.

“Even though there was no deliberate failure apparent, SANZAAR has taken the opportunity to strongly reinforce World Rugby HIA protocols including video analysis during the game, to all teams, match day medical staff and match officials participating in The Rugby Championship.

“Additionally, New Zealand Rugby has confirmed that Sonny Bill Williams is being managed in line with World Rugby HIA protocols, including HIA 3 and computer neuro-cognitive assessment, and will progress to a graduated return to play if asymptomatic,” added Marinos.

Williams has been named in the New Zealand squad to host the Wallabies this coming weekend.