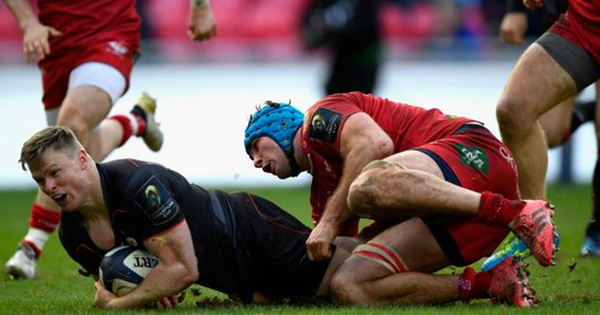 In what was a thrilling match against a tough Scarlets side, Chris Ashton managed to slide across the line during extra time for his second score to help European Champions Cup holders Saracens remain undefeated in the competition.

The draw secures Saracens a spot in the final eight as they remain at the top of Pool 3.

Scarlets held the lead 22-15 with under a minute left when Saracens started the attack that would lead to the eventual score. At this point they were also playing with 14 as Will Skelton had been sent off for a swipe he had taken at opposing flanker James Davies.

With his side down a man, Owen Farrell made two line breaks, the second of which allowed him to hook up with Ashton for the score.

It was no surprise to Mark McCall, Saracens director of rugby. “Both his tries were just the sort of tries we are accustomed to seeing him scoring… They were outstanding support lines. It is what he has been doing for years and years.”

Saracens will need to defeat Toulon to secure winning the pool and a home quarter final.