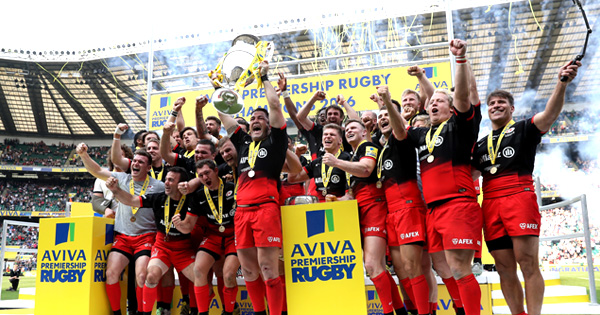 On Saturday Saracens beat the Exeter Chiefs 28-20 to achieve a historic double, winning the Aviva Premiership to go along with the European Champions Cup a few weeks ago. It is the first time since Wasps in 2004 that an English side has achieved the feat.

Only three other clubs, Toulouse, Toulon and Leicester, have done the same.

“It feels brilliant. That was a really tough game, the players were tired at half-time and Exeter came back at us in the second-half,” Mark McCall told BBC Radio London. “It’s great that we have been able to back up what we did in the Champions Cup. It’s a great achievement for the club.”

Gareth Steenson scored the most points overall, while Harlequins’ Nick Evans was the most accurate goal kicker, slotting 87.5% of all attempts at goal.

Charlie Hodgson, who played his final Premiership match, remains the leagues highest ever points scorer with a total of 2623 points. Andy Goode follows on 2285, and Olly Barkley on 1605.

In this final, Man of the Match Alex Goode gained 167 metres, the most by any player in a Aviva Premiership final since Opta began recording match data in 2008-2009.

Billy Vunipola made the most tackles, 16, with second rowers Maro Itoje and George Kruis on 14.