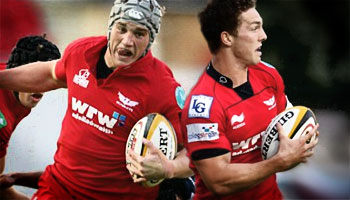 The rugby season up north has all but come to an end. For Munster, it was Magners League glory as they beat Leinster in the Grand Final, but today we look at the Scarlets, who scored some excellent tries throughout the season.

This video, all thirteen minutes of it, shows some of the great tries that Scarlets scored over the past season. While their Celtic League and Heineken Cup campaigns probably didn’t go as planned, they did however show that they’re more than capable with ball in hand.

Youngsters like Jon Davies and George North shone, and are both set to thrive in the coming years with both their domestic teams, and indeed Wales. The disappointing aspect for Welsh fans will be that none of their regions – Scarlets, Ospreys, Blues, or Dragons – managed to qualify for the quarter-finals of the Heineken Cup.

Despite this, the feeling at the Scarlets seems to be positive, as many homegrown players and young talent are coming through. Even though they’re not winning the games that count, they’re playing attractive rugby, the likes of which is at times a throwback to Welsh rugby of old.

Below is a nicely made compilation that features some excellent tries scored by the Scarlets over the past few months. It’s well worth a watch, regardless of who you support. However if you feel that you’d like to see the same from your side, please feel free to get in touch with submissions and we’ll have a look, and possibly post something up on here too. Enjoy the tries.