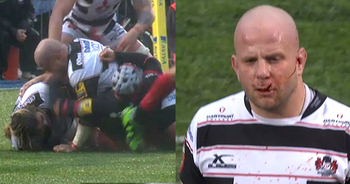 Saracens hooker Schalk Brits was shown a red card for punching during last weekend’s Aviva Premiership match against Gloucester at Allianz Park. Brits has since pleased guilty and been banned for three weeks.

The Springbok faced a discplinary hearing last night after pleading guilty to the charge of punching or striking contrary to Law 10.4(a). Chaired by Dr Julian Morris with Martyn Wood and Paula Carter, Brits has been suspended from all forms of rugby for a period of three weeks.

Brits was driven over the ball by Nick Wood, causing his knee to twist badly. He lashed out, connecting cleanly, leading referee Craig Maxwell-Keys to red card him.

“It was merely a reaction to what was happening to him at the time,” said Saracens director of rugby Mark McCall. “He was in a very awkward position at the time and these things happen when you are concerned for your own safety.”

Wood failed his head injury assesment after going off, so was concussed from the blow.

Widely regarded as one of the nicest guys in the sport, Brits was also suspended for three weeks in 2013 after he lashed out at Owen Farrell when playing for the Barbarians.

Wood himself is no stranger to the colour red, as he was sent off after just 73 seconds in the same year, against Saracens, for a stamp on the face of Jacques Burger.

Despite the loss of Brits on this occasion, and Brad Barritt to a yellow card, Saracens won the game 25-12. You can watch highlights from the match on page two.