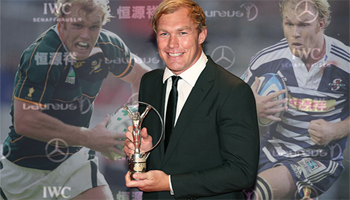 Springbok and Stormers superstar Schalk Burger has won the 2015 Laureus Comeback of the Year award for his exceptional achievements on and off the rugby pitch. You can read more about his inspirational story below, then watch the a touching video documenting his incredible journey over the past few years, and his remarkable return to topflight rugby.

Established in 1999, the Laureus Awards are essentially the sports equivalent of The Oscars. Nominees come from all over the world in a variety of disciplines, each with their own story and background that justifies their nomination.

This year Schalk Burger was recognised for his inspirational journey from international rugby player to hospital patient fighting for his life, and then climbing back to the top.

Accompanied by his humble nature off the pitch, Burger is admired as a true gentleman of the sport, encapsulating the ethos of rugby. Fortunately, his never say die attitude on the pitch is the same mindset that would see him through the months of ongoing health complications, starting in early 2013.

After genuine fears for his life, with his family by his side, the Springbok warrior fought back from bacterial meningitis, a coma, and four invasive procedures to remove the cyst on his spine which had caused the problems to begin with.

All in all he would spend 6 weeks in hospital and a further 8 weeks recovering indoors.

With a professional opinion that his rugby career was certainly over – Burger set about proving that wrong.

Now, just over two years since his initial diagnosis, Burger has played his 100th Super Rugby match and competed once again on the world stage for the Springboks, with the next goal to being selected for the upcoming Rugby World Cup.

South African Rugby Union chief executive, Oregan Hoskins, offered his words in recognition of Burger’s resolve. “What Schalk has gone through in the last couple of years and what he has achieved makes it one of the most inspirational sporting stories in our recent history.

“I would like to congratulate him on this amazing achievement.”

Below is the moving nomination video that was used at the awards to present his remarkable journey, with contributions from his wife, family, friends and Schalk himself. It goes some way towards trying to imagine just what he has accomplished after coming so close to losing it all.

On page 2 there is a fascinating interview with the man himself from his appearance on Rugby HQ last year, as well as a touching clip of him accepting his award in fitting humble fashion.