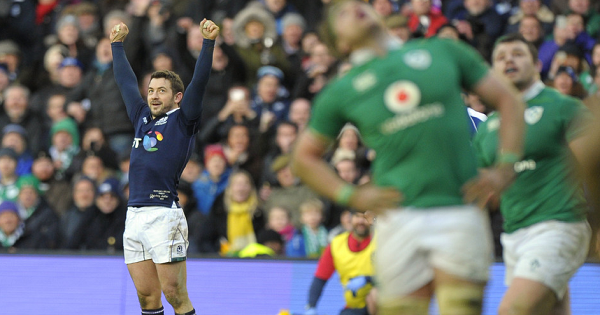 Greig Laidlaw kicked two late penalties to see the Scots over the line in the first game of the 2017 Six Nations, but the star of the match was full back Stuart Hogg, who scored a superb brace in a spell-binding opening half.

Ireland hit back from a 14-0 deficit to touch down through Keith Earls, but Scotland out-muscled and out-smarted their opponents.

This was no better demonstrated than Alex Dunbar’s utterly bizarre try. The centre joined the 5m line-out in true Barbarians style, gathered the ball from Ross Ford’s throw and barged over to score a try that completely bamboozled the Irish defence.

Laidlaw was on terrific form from the kicking tee and slotted three difficult touchline conversions to hand Scotland an incredulous 21-8 half-time lead.

Ireland’s comeback was just as impressive and they came out firing in the second half. Before they could draw breath, Scotland were down a score as Iain Henderson found the perfect body position to sneak over for the try.

Paddy Jackson then broke a half tackle to grab a crucial score that took Ireland into the lead for the first time in the match. From then on, the momentum and luck was firmly with Joe Schmidt’s side.

While Scotland didn’t score any more tries in the last quarter, they began to get the rub of the green and two vital penalties from Laidlaw saw the home side edge an ultra-tight encounter, completely blowing apart the tournament on the opening weekend.

Dunbar’s try in particular was a humourous post-match talking point. Scotland head coach Vern Cotter said: “I had nothing to do with it. It was Jonathan Humphreys who came up with it.

“I think we tried it a few years ago and it didn’t work out. But if the guys have the confidence to come up with these moves and do it in the game, I’m happy.”

Extended highlights of this entertaining match below (18 mins)