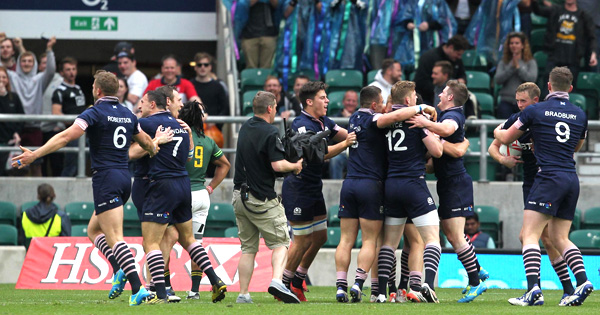 Scotland came from behind to win a thrilling London Sevens Cup Final against South Africa, claiming their first ever World Rugby Sevens Series title. With just a minute left in the match, Scotland trailed 26-15 but miraculously score twice to win 27-26.

Fiji meanwhile claimed the overall Series title by qualifying for the quarter finals earlier in the day. They had an unassailable lead, despite South Africa being hot on their heels.

Scotland had beaten hosts England and defending London Sevens champions the USA to reach their first ever final, and looked as though they had no chance after Springbok Sevens flyer Rosko Specman scored his second try of the final to give South Africa the lead.

But the Scots, whose coach called for them to be brave at halftime, kept fighting and produced a sensational victory, sending the few fans that stuck around at Twickenham to watch into raptures.

“We were a long way behind in the final but the boys stuck on task and we managed to get over the line at the end. It took a massive amount of effort and I’m honoured to say I’m captain of this side.”

Fiji meanwhile ended in fourth position as the USA claimed third place with a 26-19 win.

In Olympic year, this series has delivered some shocks, with there being as many as six different winners on the eleven legs of play. Fiji, New Zealand, South Africa, Samoa, Kenya and Scotland have all won titles, and when you consider that the Olympic event will be like just another series leg, you never know who might be taking Gold, and keeping it for at least another four years.

Fiji ended the series in first place on 181 points, followed by South Africa on 171 and New Zealand on 158. London Sevens winners Scotland finished in 10th place on 87 points.

Below are highlights of the final, as well as the knockout stages and then reaction from Scotland