Scotland snatch win with late penalty against Argentina in Cordoba 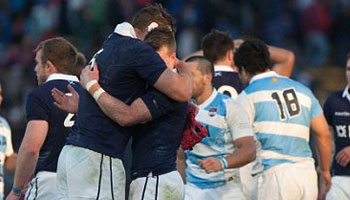 Scotland’s Duncan Weir slotted a late penalty in Cordoba to give them a 21-19 away win against Argentina and maintain new coach Vern Cotter’s unbeaten run. They now head to South Africa where they will take on the Springboks in a one-off Test next weekend.

After scraping through against Canada last weekend, and beating the USA before that, this was Scotland’s third successive win under Cotter. They were made to work hard for it though, trailing 19-10 with ten minutes left before replacement Henry Pyrgos scored in the 73rd minute.

Weir kicked a late penalty to seal the win, after having missed a chance shortly before that.

The Pumas had controlled the match after Stuart Hogg scored early on, and scored tries of their own through flanker Javier Ortega Desio and Joaquin Tuculet.

Argentina’s side weren’t full strength but have been impressive against both Scotland and Ireland, so will take heart ahead of the the upcoming Rugby Championship.

After the hooter Nicolas Sanchez had an attempt at a drop goal but failed to get it on target.

“It was a tough game and we had to find the resources at the end to come back and win,” said coach Cotter, who now takes his side to South Africa for another lift in intensity and a meeting with the Springboks, who have just beaten Wales 2-0 in their latest series.