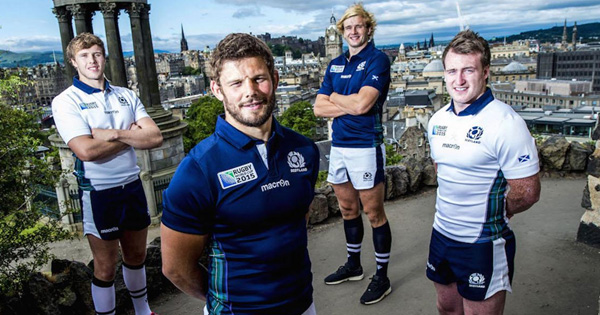 Macron and Scottish Rugby have unveiled a striking new team kit ahead of this year’s Rugby World Cup. Featuring a symbolic tartan sett in the sides, collar and sleeves, the new shirt aims to give the national team a ‘home-from-home’ feel during September’s tournament.

The kit was showcased on the top of Edinburgh’s Calton Hill by players Stuart Hogg, Ross Ford and second row siblings Richie and Jonny Gray and will make its first appearance when Scotland play Japan at Gloucester’s Kingsholm Stadium on Wednesday 23 September (kick-off 2,30pm).

The SRU Director of Commercial Operations, Communication and Public Affairs, Dominic McKay said that the kit aimed to retain a sense of tradition and pride among the Scottish team and supporters.

“We felt it was appropriate to keep a traditional feel to the design of our home and alternate kit for the Rugby World Cup, that’s in keeping with both the prestige of the competition and our Scottish heritage.

“The new kit has a distinctly Scottish look and features the Scottish Rugby tartan for the first time, some 25 years since its creation as part of the 1990 Grand Slam celebrations.

“We’re looking forward to tartan becoming a big feature of our travelling support in this year’s Rugby World Cup.”

Tartan has been a Scottish symbol of belonging for several hundred years, be that to clans, families, districts or associations.

Scotland begin their preparations for the World Cup with a series of four warmup matches, starting with a trip to Dublin on 15 August to face Ireland. They then play back-to-back matches against Italy (Turin, 22 August and Edinburgh, 29 August) before finishing against France in Paris on September 5.

Tickets for the Italian match at BT Murrayfield are from £15 for adults while all children under 12 years get in for free with a paying adult.

The new kit went on at the Scottish Rugby store on Friday (3 July) at an exclusive family fun day, barbeque and open training session with the Scotland squad at BT Murrayfield Stadium. It is now available at all Macron stockists.