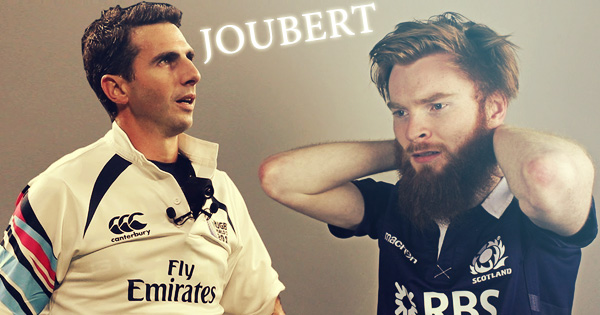 Ahead of Scotland facing Australia again this weekend, one Scottish fan has put together this dramatic piece that tells the story of what it was like to live the drama of their 2015 Rugby World Cup knockout, and how referee Craig Joubert broke the hearts of a nation.

Graham Love is a young filmaker who you might remember from his lego rugby videos.

He, like many Scotland fans, struggled to accept what happened in the World Cup last year. As you can see in this creative piece, the pain is very much still there.

“Like most Scots I was deeply traumatized by the events of October 18th last year. As the old adage goes, it’s the hope that kills you,” Graham told us. “And after a nip and tuck match, with time fast running out it really looked as if the unthinkable was going to happen, that the Wooden Spoon holders were going to triumph over the Rugby Championship winners.

“Our entire world was suddenly turned & promptly dropped on its head when Craig Joubert awarded THAT penalty to Australia. Now as Scotland fans, we’re well versed in defeat & painful defeats. Italy 2007, Wales 2010, France 2014 to name but a few.

“However, this game meant so much more than any 6 Nations match.

“To put things in context, I’m part of a generation born after the glory days of the 1990 Grandslam, but too young to appreciate the 5 Nations triumph of 99. Quite simply winning that quarter final would’ve been the biggest result I’ve ever known.

“So to come that close to a SF only to then have it snatched away from us in the last minutes by a referee who then did a runner at full time was incredibly galling.

“Now in the immediate aftermath of the game we were told to move on by the fans of other nations, however anyone who’s ever scanned the lyrics of our national anthem will know we’re not exactly the sort to just let things drop..!

“Plus World Rugby’s ruling the following day that Joubert’s decision had indeed been incorrect did little to help the healing process.”

Mr Love says that the year has gone fast, but the haunting memory of that day remains.

“Flash forward to this year and as the 18th of October loomed into view, I knew I had to make something to mark this most challenging of anniversaries. To begin with the initial idea was rather hazy, but it soon grew arms and legs!

“As for filming itself, well that was rather challenging, I wanted our reactions to be based off of the actual match footage, however the first day of filming ended prematurely, as we just couldn’t bring ourselves to revisit those last 2 minutes.

“Thankfully we managed to confront our demons the following day. After that it took another week so for me to finish up my scenes and edit it all together. ‘Joubert‘ was finally finished just before midnight on the 17th of October.

Has he finally learned to forgive and perhaps try to forget?

“Looking back at it now, I’m really glad we made it. As it certainly helped me to see the bigger picture.

“I now no longer hold Craig Joubert solely responsible for our defeat that day… instead he now shares the blame alongside fellow officals Pascal Gaüzère & TMO! Seriously though, how did none of them see the shoulder charge off the ball on Hogg!?!? That was the match right there, ARGHHHHH!!”

Just a bit of fun, and nicely made. Catch the teamsheets for Scotland vs Australia here