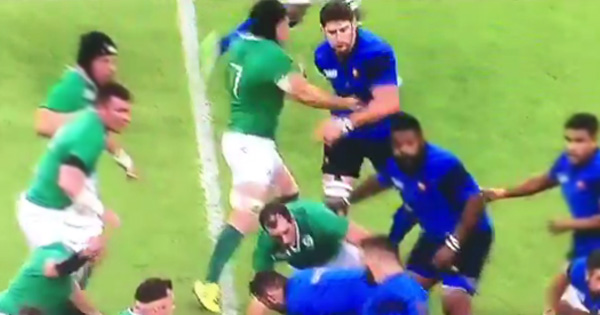 While injuries are a concern for Ireland, it could get worse as flanker Sean O’Brien has now been cited. The punch happened just seconds into the clash with France, a game that Ireland won 24-9, topping the pool and setting up a meeting with Argentina in the quarter finals.

O’Brien lashed out at French lock Pascal Pape within seconds of kick off, and while Pape stayed down for a while and needed medical attention and to catch his breath for quite some time, neither one of the three officials on the field, nor the TMO and his Hawkeye team spotted it.

“It was an assault 23 seconds into the game,” said a dismayed Philippe Saint-Andre during his media debrief today. “Why was it not acted on during the game? The players have an idea, so do I and I imagine you the media also have an idea.

“I hope that next time the TMO will really do his job. Since the beginning of the World Cup, there has been a review of the images for all sorts of matters, not just tries, but in this case they did no such thing.”

The powerhouse loose forward actually got Man of the Match, so if this was picked up by the officials at the time and perhaps he’d seen red – which isn’t too much of a stretch – it could have been an entirely different match altogether.

The incident was spotted and discussed by various TV stations, as you can see here.

News this evening confirmed that he has now been cited, so will face a disciplinary hearing in London tomorrow (Tuesday). At this stage you’d think that his World Cup might be over, or certainly his quarter final at least.

You can view two videos of it below. We’ll get better quality organised if and when possible

UPDATE: O’Brien has been banned for 1 week. It was reduced from two to one for good behaviour.