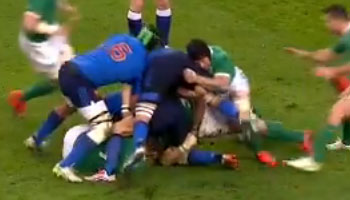 Sean O’Brien made his return to international rugby at the weekend, pleasing Ireland rugby fans after the disappointment of his withdrawal due to a warmup session injury the weekend prior. On this occasion he took to the field, and made his presence known in no uncertain terms with this huge cleanout.

This was his first Test appearance since November 2013 and that loss to the All Blacks.

The Tullow Tank said that he loved being back against France, but certainly felt the pace.

“I was blowing. I was sucking air there at one point but it was good to get the amount of minutes that I did. I was very surprised to get the shout to go back on again but the legs felt good.”

The legs and his massive frame in general were put to the test just nine minutes in, when a loose ball resulted in what could have easily been a France turnover.

Instead, the powerhouse got back swiftly and managed to clear out not one, but two French players at the ruck, and prevented a third from snatching the ball.

For the record, it was Rory Kockott and flanker Bernard Le Roux, and then he removed the threat of skipper Thierry Dusautoir too. It’s easy to miss at first glance, but this is the kind of workrate coaches love.

For his part, O’Brien praised the French, and said that they were throwing their bodies about too.

“It was tough. There were a lot of big hits close in that maybe people didn’t see,” he explained.

It was a very physical game and there’ll be a lot of sore bodies from our side and theirs but we were expecting that. They have some very big, physical players and they really got stuck into us in the second half.”