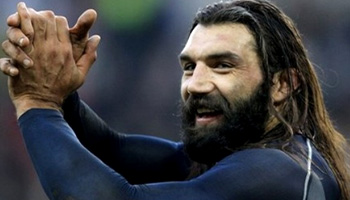 Since the weekend, we’ve received more than a few requests for a tackle that Sebastien Chabal put in against the Pacific Islanders on Saturday.

The Caveman picked up and drove back big Fijian number eight Sisa Koyamaibole as he charged ahead. Chabal is known for putting in the occasional storming run or crunching hit, and as far as textbook tackles go, this was one of the best we’ve seen from the enigmatic Frenchman.

Always popular with the fans, and one of the most recognisible faces of the Rugby World Cup last year, Chabal’s form and fitness on the field has never appeared to be quite as consistent as the hype surrounding him off it.

He has however, been named in the French side to take on Australia this weekend and is determined as ever to prove that he is worthy of a regular place in the team.

He was annoyed with media earlier today after it was insinuated that he was selected because of pressure from the fans, not for his ability to last a full match.

“You always ask the same questions. It’s not funny,” said the bearded one.

“You forget I’m also a club player and play some 30 games for the full 80 minutes each season, even if international rugby is played at a higher level. This is not the issue.

“To form a good back row you need … a cart horse. At Sale I’m the cart horse, I bring power and aggression and they love it.”

Chabal will be one to watch yet again this weekend as France host Australia in another highly anticipated end of year Test match.