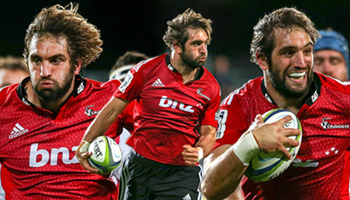 The Crusaders gave the likes of Dan Carter and Richie McCaw a fitting farewell in their last ever home game as they thrashed the Reds 58-17 in Christchurch. They scored eight tries in the process, with none better than this sensational solo effort from lock, Sam Whitelock.

Huge winger Nemani Nadolo was one of the stars on the night, as he scored two tries and set up a few others, as the Reds looked disinterested in tackling him. Understandable to an extent.

The 14 000 fans on hand made the most noise when Whitelock scored his wonder try though. His run started at 60m and after beating at least five tacklers – and gassing a few others – he slammed the ball down over the tryline, perhaps amazed at how the not so Reds sea parted.

The last time a lock wearing red ran that far without being tackled was in 2005 as Simon Shaw tore through the Manawatu defence on the British & Irish Lions tour of New Zealand. He didn’t score on that occasion, so Whitelock’s try is one for the second row club.

In fact in 2009 Whitelock scored a similar try in the NPC (Air New Zealand Cup at the time), also against Manawatu, as he collected a pass on the 60m line and sprinted down field, dummying the cover defence on that occasion to score. You can see it in our best tries mix here.

Below is an updated look at the try in full, and you can see match highlights on page two.

Full highlights of the Crusaders rout over the Reds