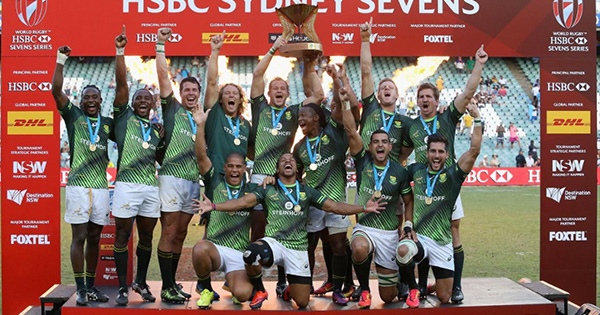 While most eyes were on the Six Nations this past weekend, the HSBC Sevens World Series made a stop in Sydney and once again it was all South Africa, defeating England 29-14 in the final. Here’s a look at the seven best tries, each one seemingly better than the last.

Of course, it’s not a Sevens tournament without some serious Fijian class and this tournament was no exception. They have a way of making try-scoring appear to be so easy and against Samoa, it seemed every player got a touch before Joeli Lutumailagi raced in for the score.

Wales then upset the Olympic gold medalists as Owen Jenkins scored a dandy in their 28-15 win, while big Danny Barrett of the US dotted down behind the posts after handing out one of his trademark fends to Canadian captain Harry Jones.

Katsuyuki Sakai of Japan scored with help from a brilliant behind the back pass by Jamie Henry, and a try from Oliver Lindsay-Hague helped England defeat New Zealand 12-5.

South Africa was able to win another tournament thanks in part to team tries like the one from Kwagga Smith and a beautiful cross kick from Justin Geduld to Chris Dry that was an excellent piece of skill.

With back to back wins after their title in Wellington, the Blitzboks sit atop the series leader board at 85 points, with Las Vegas as the next stop on the tour. England sit in second place on 68, and Fiji in third on 64.

Speedster Seabelo Senatla, now all-time try scoring record holder in 7s for South Africa, said that the win was a perfect send off for himself and Kwagga Smith, who are both leaving the sevens series for now as they head to Super Rugby.

“I am at a good place at the moment and very fortunate. Moving to fifteens is a nice challenge though and something I am looking forward to,” Senatla said.

View Seven of the Best Tries below, and highlights from the knockout rounds below that