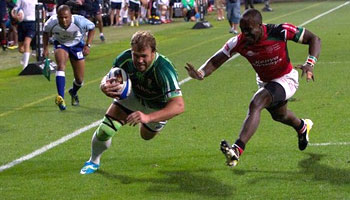 There were some excellent tries scored at the South Africa Sevens in Port Elizabeth this past weekend, so here is a look at seven of the best, starting with a scorcher from Carlin Isles. Isles’ effort, against finalists New Zealand, is arguably one of his best since taking up Sevens last year.

He wasn’t the only speedster setting the Nelson Mandela Bay Staidum alight though, as Shannon Walker and Dan Norton were also impressive, and then some of the other tries showed great ingenuity, as well as quick feet, to get over. Fiji’s passing and support play was sensational too.

Which try was your favourite?