Seven of the Best Tries from the 2015 London Sevens 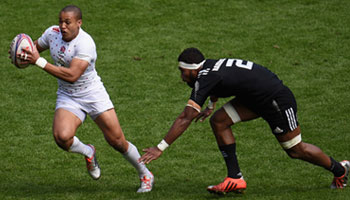 We have already seen two cracking tries from speedster Carlin Isles during the USA’s shock semi final demolition of England in last weekend’s HSBC Sevens World Series finale at Twickenham. But as the latest World Rugby highlights reel shows, there were plenty more scorchers to marvel at during an enthralling conclusion to the season.

Arguably the pick of the bunch was a scintellating effort from England’s Marcus Watson, who showed a spectacular turn of speed and fantastic footwork in the hosts’ quarter final against New Zealand – a match that guaranteed Olympic qualification for the Great Britain combined team next year in Rio de Janeiro.

Fiji pleased the record Twickenham crowd with a typically flamboyant try finished by Isake Katonibau after a sumptuous series of offloading and support play that has characterised the way the Flying Fijians have played for decades.

Tournament winners USA – managed by former England and Kenya 7s coach Mike Friday – showed significant strength to overpower Australia 45-22 in the final. Danny Barrett scored two tries including a bulldozing effort that started inside his own half.