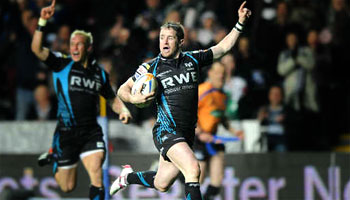 Shane Williams clearly knows how to do farewells. Not content with scoring with the final touch of the ball in his last ever game for Wales, he did the same again this weekend for the Ospreys, only on this occasion he stepped up and converted it too.

On Friday the fantastic Shane Williams documentary was posted here, a piece by the BBC that charted the life and success of Williams, who is in his final ever season of rugby.

The retiring winger played what could be his last ever home game for Ospreys on Friday night, billed as his farewell match, and he didn’t disappoint.

As with his final Wales game against Australia in December, he didn’t get much of the ball and the night didn’t quite go his way. That is until injury time, as he sealed the Ospreys 31-12 win in style in front of their largest crowd in over a year, 14,468 fans.

With Ospreys safe in the top four of the RaboDirect Pro12, a home semi final spot is all but assured, which means that we actually might be seeing Williams again, for yet another farewell match.

“I’m not injured, which is great, and I’m there in contention for selection. I would never say no. If selected, great,” said Williams. “It’s not the end of the line yet even if I’m not selected by the Ospreys because I’m involved with the Barbarians.

“But, if selected, I will certainly give my utmost in all the games,” he added.