Sale Sharks have today announced that Natal Sharks flyhalf Rob du Preez will rejoin the club, this time on a three-year deal. The Sharks number ten scored a lovely try against the Blues in Durban on Saturday and will see out the rest of the Super Rugby season before moving up north.

The son of former Springbok scrumhalf and current Natal Sharks coach, Robert du Preez, Rob junior had an impressive loan spell in Manchester earlier this season. The 25-year-old will link up with another Springbok in Faf de Klerk, forming a formidable halfback pairing for the Sale Sharks going forward.

The Currie Cup winner is Test capped but has been out of the frame after a bit of a nightmare debut against Wales in Washinton DC. He has since scored 81 points in 9 games for the Manchester-based Sharks, and looks forward to joining after Super Rugby.

“I’m delighted to have signed for Sale and was very flattered when Dimes called and asked if I would consider joining the boys full-time in Manchester,” he said. 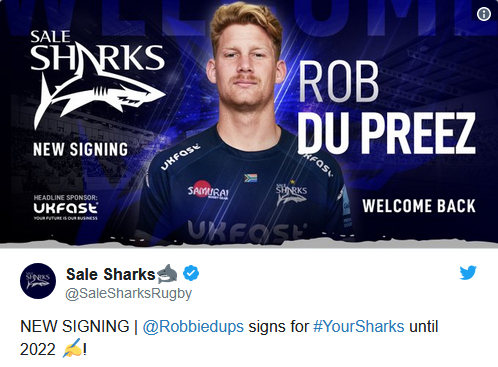 “It was an extremely difficult decision to leave The Sharks and Durban, especially with the family connections I have here but I feel as though it is the right time in my career for a new challenge, a change of scenery and feel I can continue to test myself in the Gallagher Premiership after the taster I had in 2018.

“The club have extremely high ambitions and with the calibre of signings that Sale are making I feel I can play a big part in the future of the club and can’t wait to get started in the UK.

“In the meantime, I am fully committed to the Cell-C Sharks here in South Africa and will give everything I have during this year’s Super Rugby season and hopefully build on last year’s win in the Currie Cup to produce some more special memories before I leave.”

Sale Sharks’ Director of Rugby Steve Diamond added, “Rob came to us last year from the Cell-C Sharks with an outstanding pedigree and impressed everybody here at Sale from day one.

“He quickly established himself as an integral part of the matchday squad and in his short time at the club fitted into the environment at Carrington seamlessly. Rob is exactly the calibre of player we are looking for in our quest to challenge for the Gallagher Premiership and we look forward to welcoming him back to Carrington after the conclusion of the 2019 Super Rugby competition.”

Du Preez scored a nicely taken try in the Sharks round two win over the Blues in Durban on Saturday.