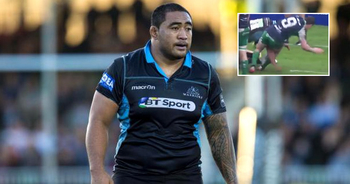 When Glasgow Warriors and Connacht faced off recently in their top-of-the-table clash, you would think that both sets of players would keep their cool for such an important match. Try telling that to Warrior Sila Puafisi, who received a straight red for a senseless clearout.

Just two minutes after Gordon Reid had scored for the Scottish side to equal the match at 7-7, Tongan international Puafisi flew into Kieran Marmion headfirst after Ian Davies had already blown his whistle.

Replays showed the prop charge late into Marmion with both arms down by his side, and Davies had no choice but to send Glasgow down to 14 men.

A win for the Scots in what was the last game of the regular season would have sent them top of the PRO12, booking them a home semi final against Ulster.

Instead the match ended up 14-7 to Connacht after Tiernan O’Halloran’s second half try, meaning Glasgow have to travel to the Sportsground again in a couple of weeks’ time, with Leinster hosting Ulster in the other playoff.

UPDATE: Pisi has been suspended for three weeks

Pisi faced a disciplinary hearing in Cardiff on Monday. The statement is as follows:

“The Disciplinary Committee determined that the offending merited a lower-end entry point based on World Rugby’s scale of seriousness, which carries a four-week playing suspension.

“The Disciplinary Committee determined that there were no aggravating factors in this case and applied a reduction of one week to recognise various mitigating factors. Mr Puafisi was therefore suspended for three weeks.

“Taking into account weeks in which Mr Puafisi was not expected to play, he is suspended from playing rugby up to and including Sunday, 12 June 2016.”