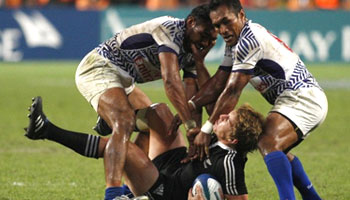 Samoa won their third consecutive IRB World Series Sevens series last weekend in Hong Kong as they beat New Zealand in the final, elevating them into the lead of the world series for the first time.

New Zealand, who had already knocked out both South Africa and Fiji, had taken the lead in the match following two quickfire tries from Kurt Baker. Samoa came back though through Simaika Mikaele, who scored two of his own to take them into the lead at halftime.

Flyer Mikaele Pesamino then scored two for Samoa in the second half as they went on to take the 24-21 win in front of 40 000 people at the Hong Kong Stadium.

This huge hit from try scorer Mikaele on Kiwi Ben Souness was felt around the ground. It’s perhaps symbolic of what’s been happening in the series of late, with the Samoans proving too powerful for the competition with their exciting brand of physicality mixed with raw speed and talent.

Souness, to his credit, took a bit of time to recover but then jumped back up and played on.

There haven’t been too many requests for Sevens highlights of late, despite plenty of quality action taking place in recent tournaments. Please remember that if you’d like to see something in particular, you should place a request via email.